The Vertical Takeoff Aircraft Revolution and How it Will Radically Change Our Lives – Just like the iPhone!

As certain as there is gravity, millions of us will be traveling point-to-point and door-to-door by vertical takeoff and landing aircraft beginning in this decade.  This transformation will involve not only small all-electric “urban air taxis” for short distances in and around urban areas, but will also involve aircraft such as XTI Aircraft Company’s TriFan 600, a vertical takeoff and landing fixed-wing airplane capable of long distance air travel up to 1,380 miles.

Vertical takeoff and landing becomes a reality in 1939

Soon after the Wright Brothers first flew at Kitty Hawk in 1903, another idea began to percolate: an aircraft that can take off and land vertically -- a vertical takeoff and landing or “VTOL” aircraft of some kind.  No runway or airport needed.

Many innovative entrepreneurs and engineers tried to invent a VTOL machine in the early 1900s, decades before the conventional helicopter was invented.  But those experimental aircraft were unsuccessful.  Even Orville Wright was highly skeptical anyone could ever accomplish such a feat.  “The helicopter type of aeroplane offers several seemingly insurmountable difficulties,” Wright said.

Finally, the modern-day helicopter was developed by Igor Sikorsky and first flew in 1939.  The helicopter is a fantastic and unique machine, allowing for point-to-point travel for over 80 years.  It has rescued thousands of people, moved a million troops, and served as a medevac aircraft in the most critical moments, transporting patients, blood, and organs since the 1950s.

But the helicopter was not the answer to achieving “VTOL fast and far”, with a cruise speed of only around 120 miles an hour and a range of about 200 miles before having to land and refuel.

The quest for long-range VTOL aircraft

Around 1960, the U.S. Army began developing several different aircraft that combined winged flight with rotors. The Marine Corp’s V-22 Osprey tiltrotor had its origins then, as did the concept of fixed-wing airplanes with smaller “ducted fans” that tilted, including the Doak VZ-4 and the Bell X-22. 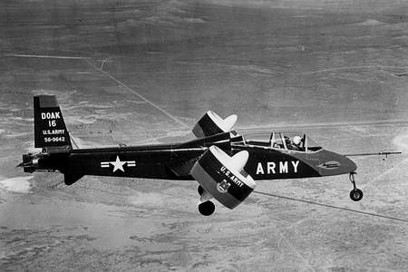 The objective was to fly “fast and far” like an airplane and at the same time provide the option to avoid airports and runways like a helicopter.  The U.S. military spent billions of dollars on the development of VTOL airplanes in the ‘60s, and the Pentagon later spent even more to develop the U.S. Air Force F-35B fighter jet, another fixed-wing VTOL airplane.  Our military has achieved its goals, but the challenge remained for someone to develop a civilian vertical takeoff and landing aircraft that could travel “fast and far”. 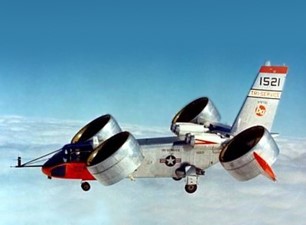 In development over the past few years, the TriFan 600 VTOL airplane will solve the “fast and far” challenge while delivering the point-to-point travel, beating any civilian aircraft currently in development (fixed-wing airplane, helicopter, electric VTOLs). 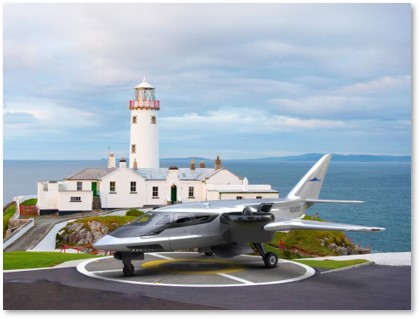 The TriFan 600 will cruise at a speed of up to 345 mph and will have a range comparable to the average business aircraft, but with incomparable door-to-door VTOL convenience -- up to 750 miles with vertical takeoff and with vertical landing (1,380 miles with a conventional takeoff and a vertical landing).  XTI is not inventing new technologies to achieve the results, but is using existing technologies in our revolutionary patented configuration, including composite material, off-the-shelf motors, batteries, and generators, an efficient turbine engine, and ducted fans.

With its hybrid-electric propulsion system, the TriFan 600 is cleaner (40% less carbon emissions) and much more affordable to operate than any conventional helicopter or other aircraft with turbine engines.  The TriFan is ideal both for the high demand urban markets and regional destinations (including remote and rural locations) which are not accessible via helicopters or short-range all-electric air taxis. In contrast to the helicopter, the TriFan 600 – like the average business airplane -- will fly above the weather and turbulence, and will be much quieter, smoother, and more comfortable than a helicopter.

Once FAA certification is achieved, the TriFan 600 will be the catalyst of a major positive paradigm shift in mobility, due to direct time, cost, and CO2 savings.  VTOLs utilize infrastructure located at or close to the points of departure and final destination, enabling pilots and passengers to avoid long trips on the ground to and from airports.  There will also be indirect cost savings because the TriFan will use the thousands of existing heliports, helipads, other paved and grass surfaces, and does not require charging stations.

Later this decade, VTOL aircraft will begin to appear overhead and on landing pads in cities across the globe -- the TriFan 600 for long distance inter-city air transit, and urban air taxis transporting people across crowded metro areas.  It will be reminiscent of when the iPhone appeared “overnight” in 2007: in less than a generation we’ve witnessed its massive disruption of other industries: communication, entertainment, and the consumption of data services (news, music, etc.).

So too will be the  advent of advanced technology VTOL aircraft throughout the world.    The airline industry and transportation in general will undergo massive disruption as the public experiences more efficient air travel that doesn’t require them to endure long drives to the airport, parking, security lines, loss of privacy, and cancelled flights.  All of a sudden, travelers will have more choice in their mode of transportation.

A paradigm shift in air transportation is on the near horizon.  The technology for “flying cars for the masses” and VTOL fast and far has now caught up with the idea, so brace yourself: We’re headed for a vertical takeoff aircraft revolution and a radical change to the way we work, play, and live in the 21st century.