XTI Aircraft is completing ground runs and system checks of a 65%-scale proof-of-concept prototype of its TriFan 600 ducted-fan vertical-takeoff-and-landing (VTOL) business aircraft prior to first flight in the next few weeks. “We have completely re-architected the propulsion system and made some significant changes to the air vehicle design,” says CEO Bob LaBelle. “We’ve moved the horizontal tail up, and it is now a T-tail. There was some obstruction of the airflow across the back tail. We also added winglets to increase the wing area and give it a bit better cruise performance.” 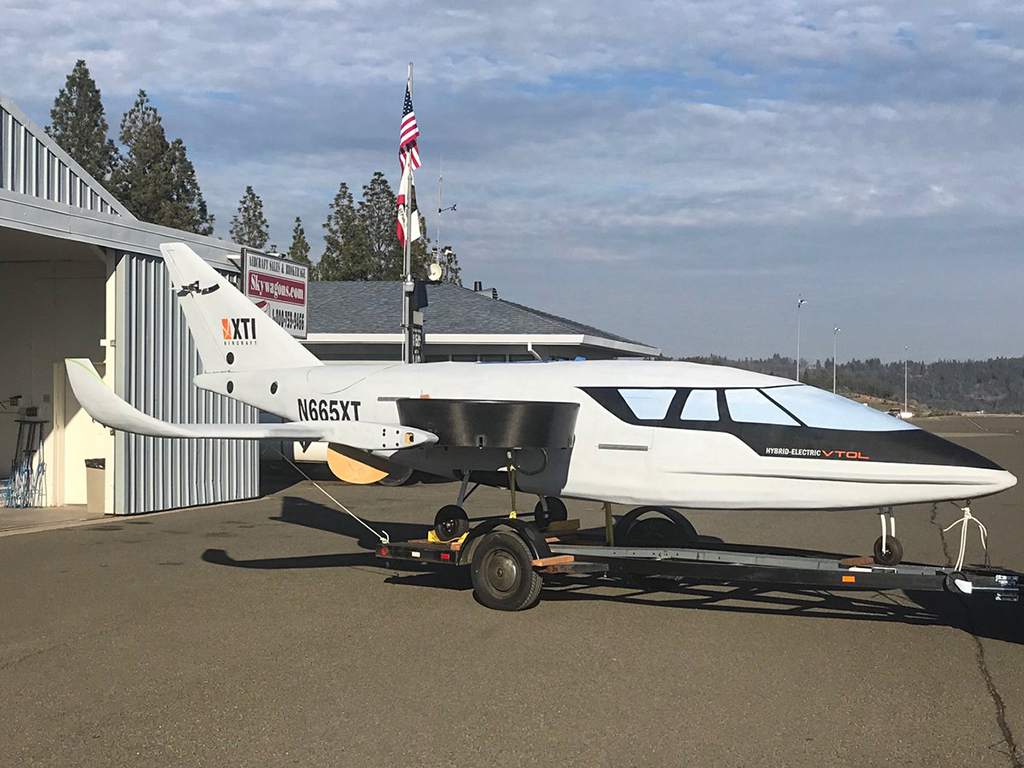 With its tail-mounted horizontal surfaces yet to be fitted, TriFan’s subscale prototype is nearing first flight. Credit: XTI Aircraft

The TriFan 600 will have a 1,000-shp turboshaft engine driving three generators that power dual 250-kW motors on each of two 6-ft.-dia. wing-mounted ducted, pivoting fans and a counter-rotating, 5-ft.-dia. fan mounted in the aft fuselage. The two larger fans are mounted on the wing leading edges and tilt between vertical and forward flight. The smaller lift-only fan, which helps counter adverse yaw via a set of vanes, is shut down and covered over with doors in forward flight.

“There are two electric motors per fan and a battery pack generating 250 kW in vertical-takeoff mode. Once you are in up-and-away flight, the liquid-cooled batteries recharge,” says LaBelle, who adds that the subscale prototype is now configured with trailing-edge flaps. “We may or may not keep those. We want to see if it makes a difference in keeping the airflow attached to the wings during transition.”

The Colorado-based startup expects to conduct a critical design review and assembly of the full-scale test aircraft over the next year, with a further two test airframes joining the program in the following year. The company is targeting certification and initial production starting around 2023. XTI has taken reservations for 76 aircraft and envisages a market for around 2,000 TriFans for a variety of missions ranging from business and commuter roles to emergency medical services and possibly military utility.